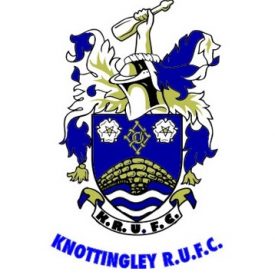 Harrogate Pythons travelled to Knottingley hoping to reverse some of the errors from last week’s defeat. Pressure was quickly applied from the kick off with The Pythons running hard through Ed Challis and Nathan Wake.  Set piece pressure at the scrum continued the Pythons drive forward but, deft handling between the home number 8 and scrum half put The Pythons back into their own 22.  Clean line out ball from Calum Brock allowed The Pythons to clear their lines to half way.  The inevitable scuffle broke out between the chasing backs.  Pythons took the line out and spread the ball wide with Challis once again strong in mid field.  Off side by the home team, line out Pythons on the home 22.  A knock on by The Pythons and the home number 8 breaks again from the retreating scrum.  Hands on the floor gives the home team chance to clear.  Pythons were penalised for side entry on their own 22, 3-0 on 18mins.

The restart went straight out giving Knotts a scrum on half way.  Once again interchange between 8 and 9 put the breakdown on The Pythons 22.  Penalty for handling on the floor, 6-0 on 27 mins.

Scott Irvine, making his debut for The Pythons, carried strongly into the Knotts half, supported by Hugh Tatlow and Challis.  A knock on returned possession to Knotts making slow progress forward against some determined tackling from Dan Shortman and Irvine.  Close support from the Knotts players and some accurate off loads, helped by some missed tackles and the home number 10 sprints under the posts, 13-0 on 38mins.

A knock on from a deep restart and Irvine drives again from number 8 feeding Matt Audsley, bundled out on the home 22m line.  The Pythons steal the line out and Challis is pulled down on the 22.  Some unpleasant exchanges from both sides lead to a yellow card against The Pythons.  Half time.

The second half began with The Pythons showing more determination.  Some disciplined play through the phases and Challis crossed the line but is driven over the dead ball line by the opposition. The referee spotted an off side at the breakdown and Will Clough took the points, 13-3 on 45mins.

The restart was turned over by Knottingley, showing some great distribution across the field with a step creating space for the try in the corner.  18-3 on 47mins.

An off side penalty and Clough’s boot puts The Pythons on the Knotts 5m line.  Catch, drive and touch down by Tatlow is not allowed for 2 players latching on in the drive and Knotts clear their lines.  Pythons retain possession and make ground with powerful runs from George Booth and Marcus Fotherby.  A loose ball on the home 22 and Irvine kicks ahead out pacing the defence to score in the corner.  Clough adds the extras, 18-10 on 65mins.

Some disappointing tackling opened up the Python’s defence from the restart and a direct run puts Knotts under the posts, 25-10 on 70mins.  The Pythons were quickly back on the offensive with some secure phases lead by Booth, John Ward and Fotherby.  Clean possession on the 22 and Irvine breaks tackles to drive some 15m and score his second.  Clough again with the extras, 25-17 on 75 mins.

A scrum from the restart and The Pythons front row dominate once again but with no reward from the referee.  Knotts retain possession and a pin point off load puts the 10 in space to score.  32-17 full time.

The Pythons next play West Park Leeds at The Jim Saynor Ground on 2nd October.