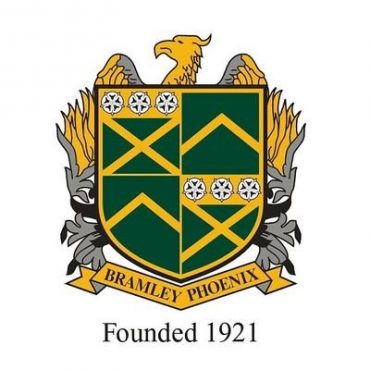 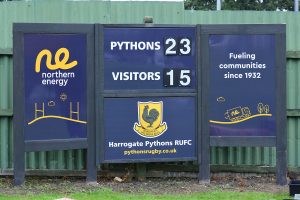 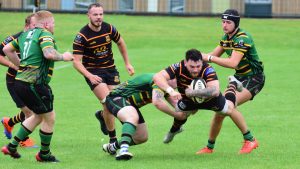 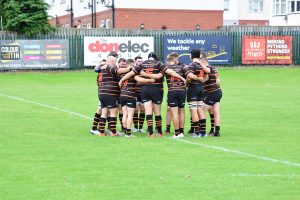 Following a long 18 months without rugby Harrogate Pythons welcomed newly promoted Bramley Phoenix to the Jim Saynor Ground for the eagerly awaited opening game of the season. Bramley kicked off and forced an early attacking scrum which was put under extreme pressure by the Pythons scrum and Bramley’s centre cut inside to be stopped by a crunching tackle from Hugh Tatlow.

Bramley, however, kept the pressure on and were eventually awarded a penalty for offside which was successfully converted. 0-3 5 mins. The visitors again gained good field position, but this time were stopped in their tracks by a turnover by debutant flanker Calum Brock. Pythons line out was worked well with accurate throwing from Sandy Dunlop regularly finding his jumpers Tatlow and Jon Pickard, but some wayward kicking was returned well by Bramley’s excellent full back.

Sam Beagrie was penalised for offside but this time the kick drifted past the posts. A Bramley clearance went straight into touch and clean ball from Tatlow was whipped up the line by Gareth Drane. Will Butler and Nathan Wake committed tacklers with drives up the middle and Bramley were penalised for offside. Will Clough stepped up to equalise. 3-3 20 mins. The Pythons scrum was now starting to dominate and Drane found a good touch kick from behind a forward moving scrum. Pickard stole the lineout and Max Sharp found Ollie Wheatley with a long pass, but Wheatley was forced into touch. A quickly taken Bramley penalty saw Brock yellow carded for not retreating 10 metres but the Pythons pack responded well and were awarded another penalty following big carries from Adam Challis and Butler. Will Clough again was accurate from the tee making the half time score Pythons 6 Bramley 3.

The second half started with Bramley again probing but coming up against some excellent defence. A Bramley pass was intercepted by Butler who fed Tatlow to carry to the 22. The ball was then shipped wide and the Pythons were awarded a penalty for a deliberate Bramley knock on. Drane took a quick tap and fed Beagrie who was stopped just short but Drane found the marauding Nino Cutino who crashed through the Bramley defence for the first try of the game, converted by Clough. 13-3 48 mins.

Pythons were now enjoying their best period of the game and moved the ball from side to side before Sharp made the break and put Jed Wolfram over in the corner for a superb try. 18-3 58 mins. More Pythons pressure saw Tatlow stopped just short and a kick return from Beagrie ended by a high tackle. The Pythons kicked for the corner and Matt Leach drove for the line with Dunlop taking the ball over for the try. 23-8 65 mins. With the Pythons pushing for the bonus point try, Bramley’s full back made a lovely break from his own half, drew the full back and put his winger in at the corner. 23-8 70 mins. Strong carries from Cutino and Leech was followed by a Sharp break and Bramley were penalised but the touch kick was ruled to have gone out in the dead ball area. To their credit the last word went to Bramley who put on the pressure and were awarded a 5 metre scrum. The ball went wide for the full back to cross in the corner and a great conversion made the final score Pythons 23 Bramley 15.

This was a great day for the Pythons who will of enjoyed being roared on by a bumper crowd, although it was disappointing not to be able to force the 4th try for a bonus point. Next weekend the Pythons travel to newly promoted Burley.