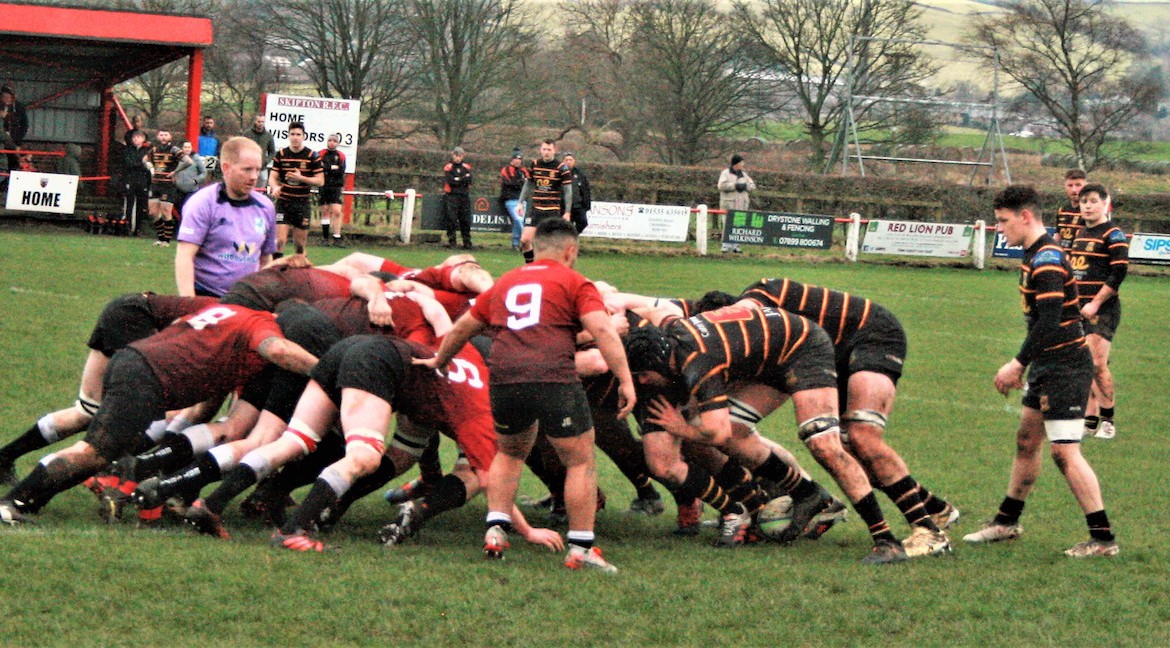 The Pythons 1st XV travelled to an overcast Skipton looking to build on their previous two performances.  With coach Dan Bird able to pick most of the previous week’s squad confidence was high.

The Pythons took possession from the kick off.  The home side made their intentions clear and turned over the ball bringing the Python’s defence into the game early on. Moving the ball through several phases tackles from Sam Beagrie, Sandy Dunlop and Jordan Payne kept the home side on their own 22 metre line. A knock on advantage gave Jed car a clearing kick and superb chasing from Beagrie who tackles the home full back into touch. Line out Pythons on halfway.  They continued through the phases with strong carries from Scott Irvine and Will Butler. Continued pressure forces the home side to concede a penalty on their 22. Will Clough on target 0 – 3 on 10 minutes

Python scrum on the home 22 and Carr puts a perfectly weighted kick towards the posts. James Audsley-Beck outpaces the opposition to dot down only to be adjudged to knock on. Skipton under pressure again concede a penalty in front of the posts, Clough’s successful.  0-6 on 20 minutes

A Payne turnover on halfway and Carr releases Audsley-Beck who’s tackled into touch two metres short of the line.  The home side’s clearance kick is passed across the Python’s back three with Beagrie making 40 metres before being tackled on the 10 metre line.  Quickly recycled ball and Carr floats a pass to Audsley-Beck who rounds the defence and touches down under the posts. Clough adds the extras 0-13, 30 minutes

Skipton concede a line out penalty on their 22.  Clough, alert as ever, taps and runs to within 5 metres but a side entry at the breakdown gives the home side the chance to clear their lines.

Marcus Fotherby steals the line out deemed not straight, Pythons scrum on their own 10 metre line and Carr kicks high, gathered by Max Sharpe who is tackled in the air resulting in a yellow card for the Skipton full back. Clough kicks for the corner, the home side are penalised for closing the gaps and The Pythons opt for the scrum 10 metres out.  The ball is spun wide, going through four sets of hands to Beagrie who touches down in the corner. Jed wolfram adds the extras 0-23 on 60 minutes

A string of penalties for the home side puts The Pythons under pressure. Repeated drives from the Skipton tight five were held firm with strong tackles from Ed Challis, Hugh Tatlow and Matt Leach. Another line steal from Fotherby gains 40 metres and the initiative is back to The pythons. Tatlow picks and drives from a scrum gaining 20 metres, taken on by Challis who wins a penalty 8 metres out. The Pythons opt for the scrum Audsley-Beck dives over for his second. Wolfram adds the extras 0-30 on 65 minutes

The Python’s pressure continues but a loose pass gives possession back to the home side. A deep clearance kick is  returned with a determined run from Carr who feeds Irvine to gain more yards before putting Beagrie into the corner for his second try.   0- 35 full time.

After the game Head Coach Dan Bird commented, “This was a better performance than last week.  Skipton’s pack were a strong and well drilled.  Although we needed to take a couple of players from our 2’s squad for some late injuries this morning I was pleased with how the lads stuck to their game.  Some great defence on our line for 10 minutes in the second half but we held firm”.