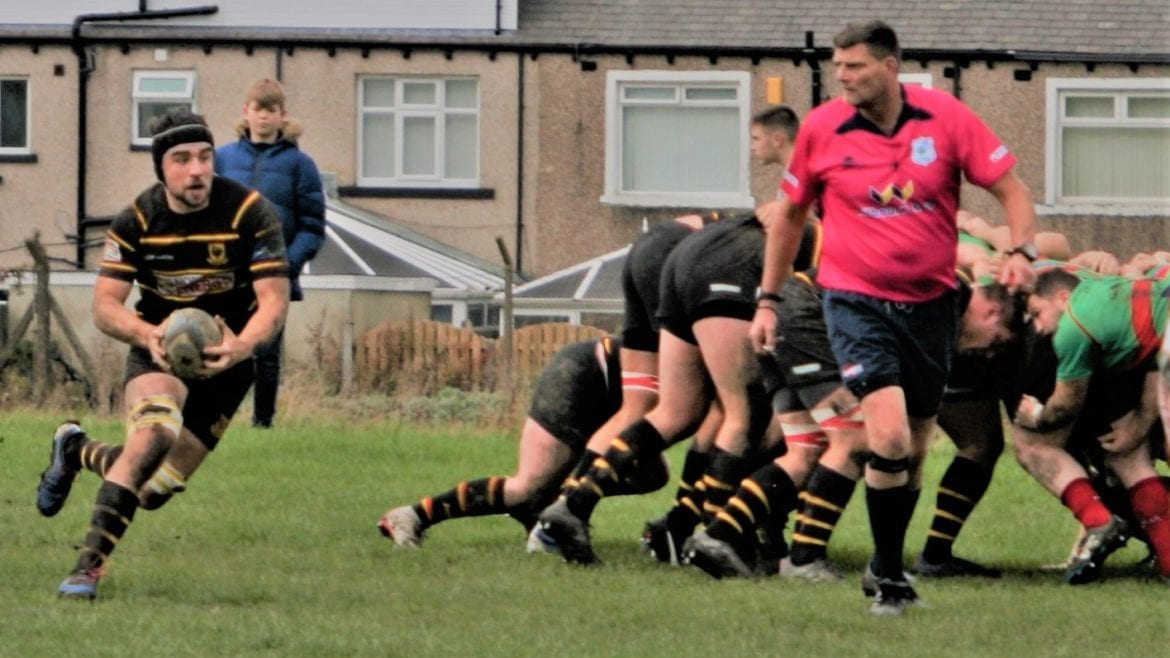 The Pythons travelled to promoted Wibsey RUFC for their first Yorkshire 3 encounter.

The Pythons kicked off and with the home side securing the ball the Pythons gave away a penalty at the breakdown. The line out on halfway was won by Wibsey and some good handling saw the home side 2nd row brush aside the Python’s defence. Will Butler halted the second phase ball with what turned out to be the first of many crushing tackles. A knock on gave The Pythons their first possession at a scrum just inside their own 22 metre line. Under pressure, the Wibsey pack were penalised for offside. The Pythons win their line out on halfway putting the ball through hands, Liam Kernaghan’s probing kicked was knocked on by the defence, scrum Pythons 30 metres out. Wibsey were caught offside but Will Clough’s penalty hit the post. The subsequent Python’s line out on 5 meters gave clean ball to the backs. A home side penalty at the breakdown in midfield gave Clough another shot at goal, 0 -3 on 10 minutes.

The Pythons played through the phases with possession lost to a line out won by Wibsey with a tap back. Hugh Tatlow seized on the ball only to be stopped short of the line by the referee’s whistle suggesting a Pythons knock on. Wibsey take their own ball and move the ball into midfield and are awarded a penalty for a high tackle. The kick failed to find touch with Audsley- Beck punting it back deep into the home side’s 22. Although fumbling the ball the home side full back made good ground before before being stopped by Audsley-Beck . The Pythons were penalised again for offside at the ruck, Wibsey win the resulting line out moving the ball into midfield with the tackle made by Audsley-Beck deemed high by the referee earning him 10 minutes in the bin .

A quick penalty from the home side was stopped by another high tackle a further quick penalty was halted by Butler with a textbook chop tackle . Butler again halted the second phase with the lines being cleared by a Youngson kick. The Wibsey runner was halted in midfield by Clough with subsequent phases stopped by Beagrie, Leach, Dunlop and Butler. A kick through by the home side was collected by Youngson who set off at pace with Tatlow on his shoulder only for the referee to ignore the advantage for an offside he had spotted at the kick.

Pressure on the home side was eased when Kernaghan was deemed to have been held up in the tackle. What should have been a scrum was changed to a penalty thanks to some advice given to the referee by the Pythons. Wibsey clear their line, line out on halfway. A knock on gave the Pythons possession at the scrum moving the ball through several phases across the pitch but gaining little ground. A forward pass gave Wibsey a scrum The Pythons dominance at the scrum led to a knock on – scrum Pythons. The ball moved through 4 phases in front of the Wibsey posts with Butler, Price-Gerrard and Dunlop showing some powerful running. The play ended with an unsuccessful drop goal attempt by Audsley-Beck.

The 22 drop out was returned by Youngson moving the ball into the centres but taking a shoulder to the head as he released his pass. Play eventually stopped for a Pythons knock on and with Youngson leaving the field , HIA, Rob Cooper came on at 10 for his Pythons debut. A crunching tackle from Dunlop saw the ball spilt and Pythons regained possession at the scrum. A penalty at the scrum gave Cooper the ball who punted it 40 yards deep into Wibsey territory. The following phases saw the Pythons lose ground by gifting penalties to the home side. Half time.

Returning Joe Bentham came off the bench into the centre and made an immediate impact. Ed Challis replaced the injured Beagrie moving into the 2nd row putting Tatlow to number 8. Wibsey drew level 3 -3 on 45 minutes converting a soft penalty in front of the Python’s posts. Determined Wibsey pressure gave them valuable territory up to a breakdown on halfway where the Pythons won ball and Tatlow gained 30 yards with a strong run before being pulled down 10 yards short of the line. 3 or 4 further phases gave the Pythons a scrum 15 yards in front of the posts. Wibsey conceded the scrum penalty Cooper took the points 3-6 on 50 minutes.

A penalty on halfway gave the home side a 5 metre line out. Secure ball was turned over with the Pythons possession lost through a knock-on just in the Wibsey half. A technical infringement gave the Pythons the put in at the scrum with Clough bundled into touch on the Wibsey 22 . Some untidy play by both sides saw the ball kicked deep into the Pythons 22 where an unlucky knock-on gave Wibsey a scrum. The dominant Pythons pack was penalised for wheeling and a quick tap penalty led to a Wibsey try under the posts 10 – 6 on 62 minutes.

Shortly after the restart a sharp inside ball put the Wibsey centre on a great line and with a perfectly timed inside pass put the standoff under the Pythons posts 17 – 6 on 65 minutes. The Pythons continued to dominate the set piece but infringements at the breakdown stopped them gaining ground. Buttler stole the ball at the front of a line out on the Python’s 5 metre line with much-needed ground made with some slick passing and direct running from Sharp, Bentham and in the later phases Butler. Wibsey conceded an offside penalty and Cooper drilled Wibsey back into their 22. A scrum penalty was rescrummed by the Pythons. Quick ball saw Youngson stopped close to the line, continued pressure in the phases gave the Pythons a 5 metre penalty – scrum time. The Pythons spun the ball wide and the Wibsey defence was secure. The referee was playing advantage and bought play back to the scrum for a home side offence. The Pythons opted for the scrum walking the opposition over the line with Tatlow touching down. Cooper converted 17 -13 on 78 minutes. The Pythons put pressure on the home side for the remaining 2 minutes and although gained good ground could not add to their score.
The Pythons travel to Hemsworth on the 26th. 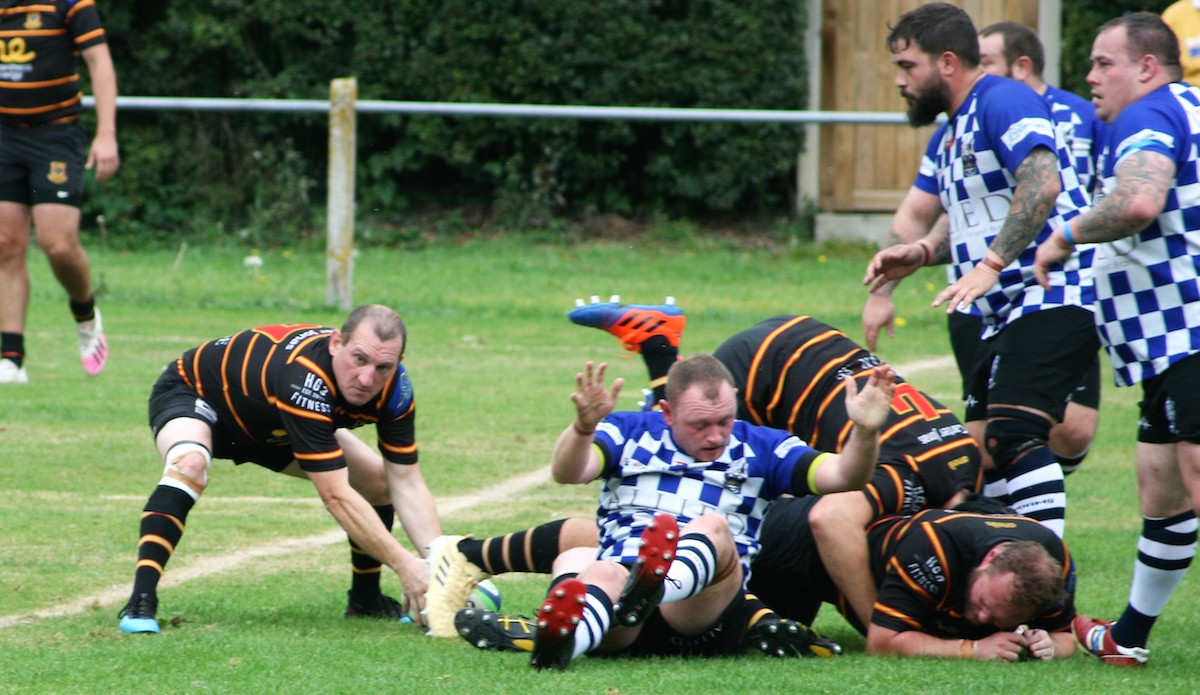